You are here: Home1 / Wolf Info2 / Wolf News3 / Headlines4 / Alpha wolf: What does it mean, and should it still be used?

When visitors come to the International Wolf Center in Ely, Minnesota, and observe our pack of ambassador wolves, many of them ask: “Which one is the alpha?” So begins a long conversation about the term and what it means.

It’s a term that started in  the field of ethology, or animal behavior, and is now widely used in popular culture. While it is popular, it’s also misleading when applied to wolves. In fact, the International Wolf Center has stopped using the term altogether. 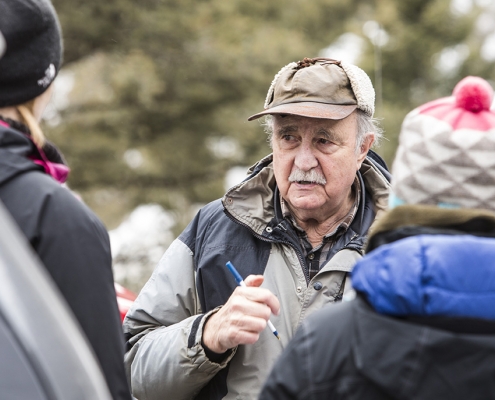 It all started in 1947, when Rudolph Schenkel wrote a paper titled Expressions Studies on Wolves. It can be read in its entirety by clicking here.

On his website, Mech said: “This is the study that gave rise to the now outmoded notion of alpha wolves. That concept was based on the old idea that wolves fight within a pack to gain dominance and that the winner is the ‘alpha’ wolf.”

Then Mech referred to Schenkel’s study as he was writing a popular book on wolves.

The concept of the alpha wolf is well ingrained in the popular wolf literature, at least partly because of my book “The Wolf: Ecology and Behavior of an Endangered Species,” written in 1968, published in 1970, republished in paperback in 1981, and currently still in print, despite my numerous pleas to the publisher to stop publishing it. Although most of the book’s info is still accurate, much is outdated. We have learned more about wolves in the last 40 years than in all of previous history.

One of the outdated pieces of information is the concept of the alpha wolf. “Alpha” implies competing with others and becoming top dog by winning a contest or battle. However, most wolves who lead packs achieved their position simply by mating and producing pups, which then became their pack. In other words they are merely breeders, or parents, and that’s all we call them today, the “breeding male,” “breeding female,” or “male parent,” “female parent,” or the “adult male” or “adult female.” In the rare packs that include more than one breeding animal, the “dominant breeder” can be called that, and any breeding daughter can be called a “subordinate breeder.”