You are here: Home1 / About Us2 / Financial Statements

The International Wolf Center relies on financial and in-kind donations from members and donors, foundations, corporations and wolf enthusiasts around the globe to advance our mission. Below are PDF’s of our annual reports, audited financial statements and IRS form 990’s for the International Wolf Center’s previous years’ operations. Audited financial statements are available upon request from the development director, or you may view past Form 990’s filed with the State of Minnesota.

From the Chair of the Board of Directors

With the work of staff and help of supporters, donors, members and volunteers, the International Wolf Center spent 2019 living, breathing and creating change.

After four years of planning, the new $1.37 million educational “Discover Wolves!” exhibit opened at the Interpretive Center in Ely, Minnesota, on June 28. The family-friendly adventure creatively features wolf howls, northern lights and a simulated airplane ride to track Minnesota wolves. Funding from the Legislative-Citizen Commission on Minnesota Resources and contributions from the Center’s board and donors made the exciting new exhibit possible. Rep. Rob Ecklund and members of the Ely City Council, Ely Chamber of Commerce and the Iron Range Resources and Rehabilitation Board helped us celebrate. 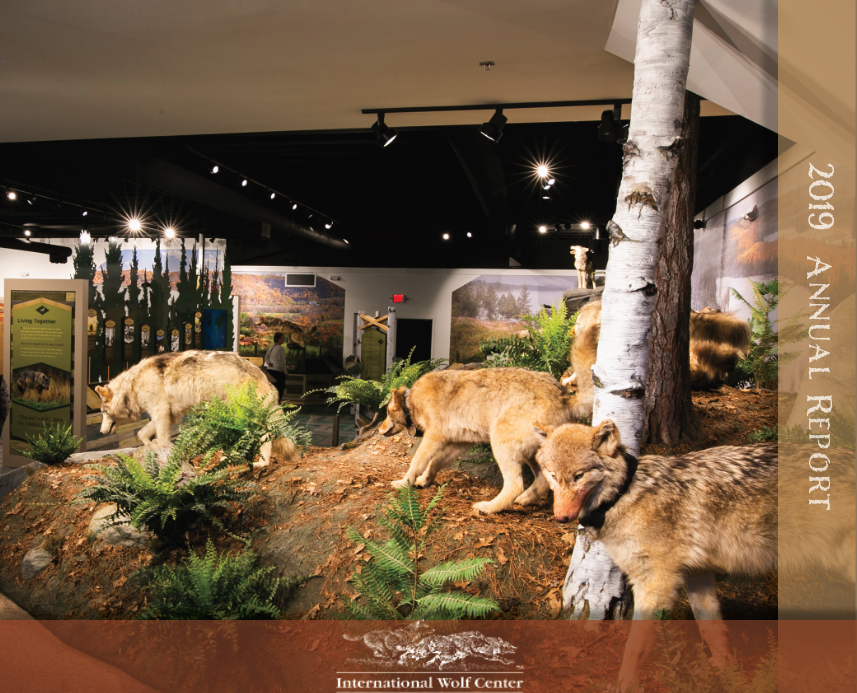 Our educational agenda expanded with two-way videoconferencing WolfLink programs reaching as far away as Vietnam and Nigeria. Work began on Western Wolves at our Door with funding from Valarie Gates and the Margaret A. Cargill Foundation, a project to partner with nature centers and environmental organizations in eight western states to support new wolf education efforts there. With the U.S. Fish and Wildlife Service announcement proposing delisting the gray wolf in the lower 48 states, the Center began efforts to keep the public informed about upcoming Minnesota wolf management plans.

It was a year of highlights. The Center staff was recognized for its terrific work during the leadership transition and new exhibit design. Wolf Curator Lori Schmidt was honored for 30 years of ”unstinting, conscientious cautious and caring work with our ambassador wolves.” Volunteers from the Center saw more than 13,000 visitors at the Minnesota State Fair. The Howl at the Moon Gala in September attracted record attendance, after rescheduling from an April snowstorm. Board members contributed more than 2,000 hours of volunteer time in the year.

Thank you to all of the Center’s supporters, staff and board members for this year of successful transitions and good work for our mission to “support the survival of wolf populations by teaching about wolves, their relationship to wildlands and the human role in their future.”